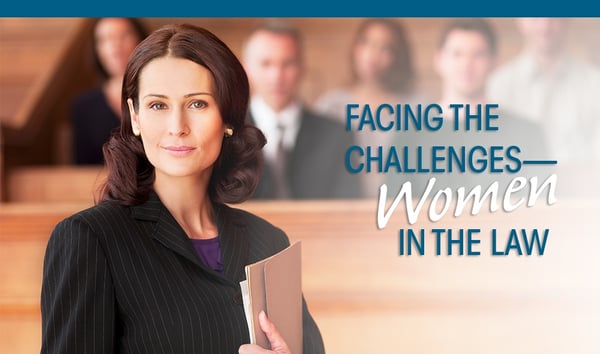 On January 21, 2017, more than 2.3 million people worldwide took part in over 673 marches throughout 32 countries to bring awareness to women’s rights. For many Americans, 2017 has been an eye-opening year as social issues that some might have tried to put in the back of their minds, or that never crossed their minds, have risen to the forefront.

One important topic: pay discrimination in the workplace. Women in the United States generally earn around 80 cents on the dollar in comparison to their male counterparts.[1] Statistics show that the highest paid occupations have the most disparaging wage gaps.[2] It should not, then, come as a surprise that the legal field has one of the largest gender pay gaps of any industry. According to data released in 2016 by the Census Bureau, women attorneys earn about 56 cents to every $1 made by their male counterparts.[3] This statistic is staggering given the fact that lawyers in general confront inequality for a living.

The challenges facing women in the legal profession are not limited to unequal pay. Women in the law face a multitude of obstacles that their male counterparts probably don’t even stop to consider. For one, women in the legal profession are often judged first by their appearance and second by their abilities in the courtroom. This was no better articulated than in a 2014 blog post by federal court judge Richard Kopf in his now discontinued blog, Hercules and the Umpire. There, Judge Kopf wrote a post praising a young woman attorney for her skill and professionalism, but chose to conclude by noting that he most appreciated her “very short skirts and [that she] shows lots of her ample chest.”[4] Judge Kopf went on to advise young female lawyers to remember, “[Y]ou can’t win. Men are both pigs and prudes. Get over it.” He also implored them to “think about the female law clerks. If they are likely to label you…an ignorant slut behind your back, tone it down.”[5] The Court’s commentary was both horrific and true—women are judged by the clothes they wear and the perception of how they look in that attire.

Fashion aside, big challenges arise when women attempt to infiltrate legal practices that are traditionally male-dominated as opposed to the more “female-oriented” areas, such as family law, appellate work and second-chair trial careers. The latest statistics of gender breakdown in the legal profession from the American Bar Association should serve as a call-to-action for women to fight for a rightful place at the table. As of January 2017, the legal field is comprised of 64% men and 36% women; yet, in the past five years, only 16.5% of lead attorney roles in the highly lucrative world of mass tort multidistrict litigation (MDL) have gone to female attorneys. Further, a study conducted by Temple University’s Beasley School of Law found that 98% of all MDLs between 2011 and 2016 had at least one man in the highest leadership position—a sharp contrast to the fact that 49% of MDLs had no women at all in the upper level of multi-plaintiff case leadership. Multidistrict litigation and plaintiffs’ law in general have frequently been described as a “boys club” and statistics seem to support this harsh reality. That said, in November 2015 the first ever female-majority plaintiff steering committee in a multidistrict litigation was announced in the Power Morcellator MDL.[6] However, while the equality seen in the Morcellator MDL has been lauded as a step in the right direction, it is just a small step towards true equality in multidistrict litigation.

Recently, attorney and filmmaker Sharon Rowen was asked about the issues facing women in the legal profession and for any advice she might impart. Ms. Rowen has been interested in the issues facing women lawyers since she first began to practice law in the 1980s and recently debuted her film, “Balancing the Scales,”[7] to much acclaim. Ms. Rowen spoke about the importance of women supporting and mentoring each other as a catalyst for change to occur. The need for women to support each other is crucial for the advancement of women in not just the law but in every area of modern life. Women face so many uniquely-female issues that their male counterparts do not consider. Many of the attorneys that were interviewed for “Balancing the Scales” brought up the issue of childcare and the lack of gender equality when it comes to the idea of “having it all.” In “Balancing the Scales,” Ms. Rowen stresses that it is ingrained in our modern culture that it is the woman who is expected to take a step back from her career to raise children. In the end, it is through a dialogue between women of the common problems that they are facing in this industry that will help to bring about real changes. “Only when our current assumptions are finally recognized as a problem can we then start seeking real solutions.”[8]

Women have made enormous strides in the law over the last few decades, but there is still a long road ahead to reach true equality. In this series on the experiences of women in the legal profession, we hope to open up a dialogue not only about the struggles that female attorneys face, but also the triumphs and strides that have been made towards gender equality in the legal field. We will be speaking with some of the most influential women in plaintiffs’ law to gain a unique firsthand view on their past experiences, feelings on the current situation and where they feel the industry is headed and the role women will play in the future.