A Closer Look at the Paragard MDL: A Conversation with Attorney Marcus Susen 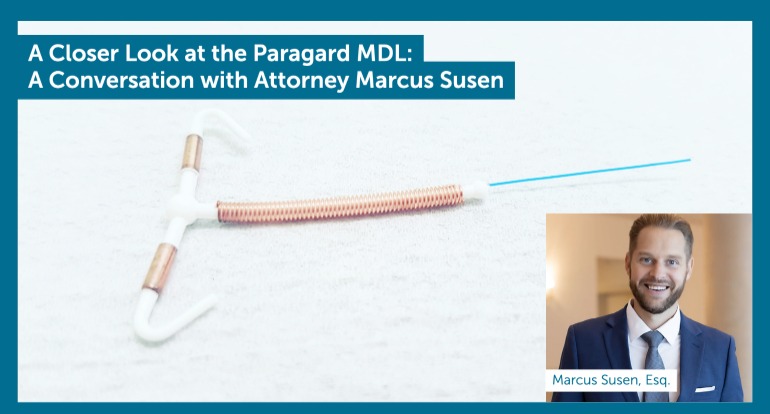 The Paragard litigations saw significant advancement in the final months of 2020, with steps taken toward the formation of a multidistrict litigation (“MDL”) in September 2020 and formal consolidation into an MDL in the Northern District of Georgia under Judge Leigh Martin May occurring in December 2020. Over the past few months, the litigation has continued to gain momentum with Judge May appointing leadership positions on February 18, 2021. In late June, we had the privilege to discuss the litigation with a member of the plaintiffs’ steering committee, attorney Marcus Susen of the Susen Law Group.

CF: Tell us about the Paragard litigation and the common injuries associated with these cases?

MS: To start, Paragard is a non-hormonal intrauterine device or “IUD.” The “D” stands for “device,” however, it is important to note that Paragard is regulated by the FDA as a drug, not a medical device.

The IUD itself is a T-shaped plastic frame made of polyethylene and barium sulfate that is inserted into the uterus. The copper wire that is coiled around the IUD produces an inflammatory reaction that is toxic to sperm and eggs in order to prevent pregnancy. A monofilament polyethylene thread is tied through the tip of the IUD resulting in two white threads that then aid in the detection and removal of the IUD.

Ideally, to remove the product, the arms of the Paragard IUD are supposed to fold upward at the joint to aid in the removal process. Physicians are instructed by the manufacturer of the drug to locate the two white threads and to pull gently until the IUD is expelled from the uterus.

However, oftentimes the arms of the IUD will break upon removal causing complications and injuries. Many times, this necessitates surgery to remove the broken piece of the device, which can cause infertility and pain. The injuries in the MDL are limited to injuries caused specifically by Paragard breaking upon removal which can include infection, perforations and hysterectomies. However, I would say that the most common injury that we see in this litigation is the need for additional surgery to have the IUD removed, which is interesting considering that the product was heavily marketed as a convenient, non-surgical form of birth control.

CF: What is the current market status of Paragard?

MS: Paragard is still being sold on the market. In 2019, the manufacturer, CooperSurgical (“Cooper”), updated its warning associated with the product. It’s worth noting that in July 2019, the FDA issued a warning letter to Cooper as part of its Bad Ad Program. The FDA admonished Cooper for airing television ads that make false or misleading representations about the risks associated with Paragard.

CF: You’ve mentioned CooperSurgical—are there any other companies that are named as defendants in this litigation?

MS: Paragard as a product has changed hands several times. It was originally developed by Duramed Pharmaceuticals in 1982 and launched into the market in 1984. At the time, it was only approved for up to four years of continuous use. In 1994, the drug was approved for up to 10 years of continuous use. Paragard was purchased by Teva Pharmaceuticals in 2009 and then sold in 2017 to The Cooper Companies Inc., the entity that currently owns, manufactures and sells the drug.

The defendants in this litigation include Teva Pharmaceuticals, one of the previous owners of the IUD, Cooper Companies Inc. and CooperSurgical Inc., the current owner of the product.

CF: Can you take us through the procedural history of the litigation?

MS: I would say that procedurally the Paragard MDL is still in its infancy stages. As you are aware, the MDL itself was consolidated in the Northern District of Georgia under Judge May in December 2020. Since then, leadership was appointed in February 2021 and a short form complaint and a master complaint were approved in June 2021. A direct filing order was issued on June 16, 2021, which will allow people to filed complaints directly into the MDL and I believe that will allow things to start to move more quickly going forward. Additionally, the defendants have filed a motion to dismiss which is going to be heard towards the end of summer 2021.

CF: What would you say have been the biggest challenges associated with litigating Paragard suits?

CF: What would you tell attorneys looking to get involved in this litigation to carefully consider during the intake process?

MS: I would remind any attorney looking for Paragard cases that the criteria for cases included in the MDL is very narrow. I don’t believe that the Paragard MDL is going to be a 100,000-case mass tort simply because the criteria to be included in the MDL is so specific. The plaintiff must have retained an injury from breakage of the device upon removal. The MDL is not, at this point, asserting damages for auto-immune issues, metal toxicity issues, or other injuries that we saw in the Essure litigations. Whether the MDL will eventually expand to include additional types of injuries, I think it’s a little too early to say.

CF: Has the Paragard MDL seen any setbacks due to COVID-19?

MS: No, not really. As I mentioned earlier the MDL was consolidated in December 2020, when everything was still shut down. The Court has kept things moving with Zoom status conferences every month and I think that the teams on both sides are working hard to keep this litigation as streamlined as possible.