Considerations Upon Returning to the Courtroom 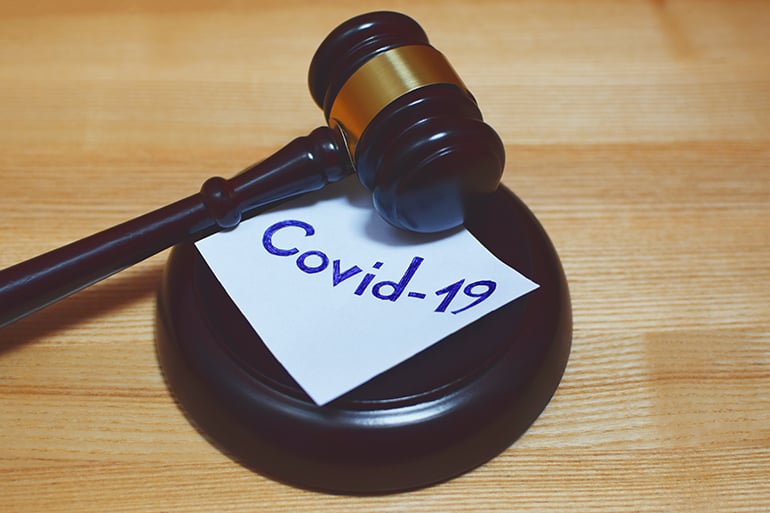 As the United States court system attempts to slowly move towards pre-pandemic productivity, judiciaries must balance the need to progress pending litigation and keeping Americans safe amid the COVID-19 health crisis. Reopening is taking place in “stages” in many states, each with decreased restrictions as the courts strive to regain full operation. The expansive nature of the American judicial system equates to numerous different policies and precautions implemented, but the following are general measures courts across the country are putting in place as they process the backlog of matters postponed by the pandemic shutdowns.

Many trials that were set to begin in the spring and summer of 2020 have now been postponed. As such, courts and judges are seeking creative ways to accommodate the need for social distancing as litigation gets back underway.

In a recent status conference in the Zofran multidistrict litigation (MDL No.: 02657), Judge F. Dennis Saylor IV of the U.S. District Court for the District of Massachusetts joked that the bellwether trial once scheduled for May 2020—which has now been postponed indefinitely—might have to take place in Boston’s famous Fenway Park. On a more serious note, Judge Saylor went on to say that holding an in-person trial, with all the corresponding people that that such an undertaking would naturally include from legal teams and courtroom staff to the juries and court reporters, would be nearly impossible to do while maintaining adequate social distance in a traditional courtroom setting.

Judge Saylor went on to allude that perhaps the trial could take place in a larger setting such as a hotel ballroom, where a larger contingent could be accommodated and still allow for proper social distancing. The thought of holding a trial in a location other than a courtroom may have been unfathomable just a few months ago, but creative solutions must be implemented to keep cases flowing as smoothly as possible to alleviate the backlog that COVID-19 has created in many jurisdictions.

An essential component in any trial—the jury—poses a significant roadblock for resuming court proceedings. The jury box alone presents a major issue as it is no longer considered safe to allow people to be in such close proximity to each other. Beyond the basic consideration of where the jurors will sit during a trial, there are still countless other factors that affect juror safety as the threat of COVID-19 still looms.

The layout of a courthouse, or alternative location, must be conducive to the smallest logistics, such as simply entering and exiting the location in which a trial is to take place. Will jurors and legal teams have to take an elevator to arrive at the courtroom? Will there be a designated flow of foot traffic in the hallway leading to the courtroom in order to maintain proper social distance? How will jury deliberations be handled? Courts must determine where the jury will sit to deliberate, as the previous tight quarters of the typical jury room is no longer acceptable. Some alternatives to circumvent this problem may include allowing jurors to use empty courtrooms or even relocating them to offsite to school gymnasiums or hotel ballrooms in order to provide a larger venue for deliberations.

Jury selection will also need adjustment in the post-COVID legal world. Not only will the location and number of pooled candidates need to be altered, but many in the legal community speculate that jury summonses and questionnaires will require modification in order to quickly excuse potential jurors who are high risk of contracting COVID-19 or are essential workers.

The law has often been seen as a profession that is slow to embrace technology. The tide has changed in recent years with the advent of case management systems and litigation analytics software and many lawyers have begun to integrate more technology into day-to-day firm operations. The coronavirus pandemic and the subsequent shutdown of physical courthouses seemingly forced even the most electronically-averse attorneys and judges to embrace new technology in order to keep legal matters moving.

Despite many courts now moving towards phased re-openings, several jurisdictions remain keen on the use of technology to keep in-person meetings to a minimum. For example, the New Jersey judiciary has announced that, as it starts allowing a small percentage of judges and court staff to return to court facilities, it is still encouraging all matters that can be handled virtually through telephonic or video conferencing to continue to do so. The Illinois judicial branch likewise is continuing to encourage virtual meetings, stating that any party may take a deposition by telephone, videoconference or other remote electronic means simply by stating in the notice the method to be used. Judges in New York City have announced that they will also continue to conduct matters virtually even in instances where the judge presiding over the matter is physically in the courthouse.

While the use of technology has proven essential to the judicial system during the shutdown, it has been questioned whether it is a viable option for all litigants, especially pro se parties. While New York City judges have expressed a desire to continue to conduct all matters virtually for the foreseeable future, the bench has noted that is has set aside space in courthouses for pro se litigants who lack the technological means to access essential court services.

Many companies that provide call-in services to courts have significantly lowered their prices as a result of the pandemic. For example, prior to the shutdown, the typical cost for a court call-in service was around $86 per party represented on the call. Recently, the price has decreased to around $30 per party in most cases.

Other nuanced uses of technology to adhere to social distancing guidelines have been discussed as in-person interaction becomes more prevalent. Many jurisdictions are contemplating adding TV screens in conjunction with wireless microphones for attorneys if a trial is held in a larger venue. Personal technology, such as iPads, may be distributed to jurors to facilitate viewing evidence in a larger, alternative courtroom setting.

Overall, courts have been compelled to find innovative solutions to resuming normal functioning and are now embracing alternatives not previously considered. The global pandemic is sure to be a catalyst for long-standing changes to how the U.S. judicial system operates for the foreseeable future.

Counsel Financial provides working capital credit lines exclusively for the plaintiffs' bar in all states except California, where credit lines are issued by California Attorney Lending.*