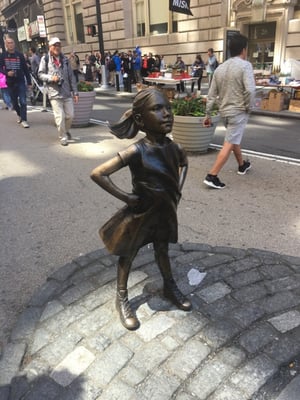 On February 14, 2019, State Street Global Advisors Trust Company (“SSGA”), the sponsors of the world famous “Fearless Girl” statue filed suit against Kristin Visbal (sculptor of the iconic statue) in New York State court. SSGA alleges that the artist has been selling unauthorized replicas of the statue causing irreparable harm to not only Fearless Girl and her message but also to SSGA, its reputation and its rights.

The famous statue in question features a young girl standing around four feet tall cast in bronze, arms akimbo in a girlish dress and swinging ponytail, staring down the “Charging Bull” statue in New York City’s Financial District., SSGA commissioned the sculpture in an effort to promote its progressive gender diversity goals, under their Fearless Girl campaign. In the complaint, the plaintiff argues that the statue is a visual representation of the company’s commitment to asset stewardship and that SSGA uses its voice and vote to make a measurable difference around the globe. The statue was installed before the opening of the stock exchange on International Women’s Day 2017 and within the first 12 hours of its unveiling, the statue gained over 1 billion Twitter impressions. Within 20 months of the Fearless Girl’s residency in the Financial District, SSGA argues, the statue and the campaign she represents has inspired more than 300 companies globally to add a female director to their previously all-male boards.

The case is: State Street Global Advisors Trust Company v. Kristen Visbal, Case No.: 650981/2019, in the Supreme Court of the State of New York, County of New York.