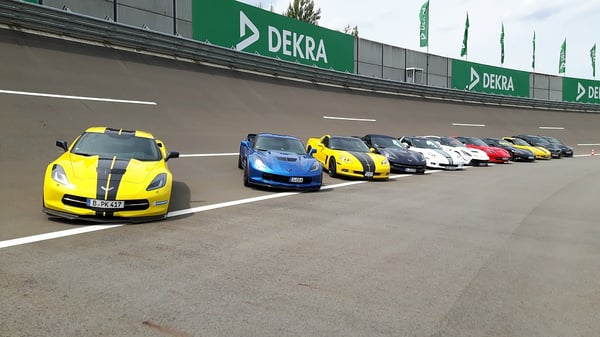 In Florida federal court on Tuesday, June 13, 2017, a group of Corvette Z06 owners filed a 193-page complaint against the sports car’s maker, General Motors LLC (“GM”). The drivers involved in the suit are alleging that GM revved up the Z06’s race track performance capabilities and failed to disclose a defective cooling system that causes the car to overheat and fall automatically into what is known as “Limp Mode,” in which the vehicle operates at dramatically reduced speeds unexpectedly.

The plaintiffs—racetrack enthusiasts—would often buy 30-minute time blocks on closed tracks to drive their cars at high speeds (easily exceeding 125mph) in a safe and controlled environment. However, things quickly started to go awry for many 2015 and 2016 Corvette owners on the track. While driving at above average speeds, the car would overheat and enter Limp Mode within just 15 minutes. Entering Limp Mode, a direct result of an ineffective cooling system, drops the car to dangerously low speeds without warning to the driver or surrounding track users. This degree of overheating has the potential to warp the engine itself as well.

According to the drivers, “Customer experiences with the Z06 on the track differ dramatically from GM’s promise of a track vehicle.” The way that GM marketed the vehicle led consumers to believe that the Z06 was ‘conceived on the track’ and had ‘track proven structure and technologies.’ The plaintiffs believe GM is guilty of a “classic bait and switch” by enticing fast-car enthusiasts with bells and whistles and promises of a car that could safely maintain high speeds and power on the track.

The complaint accuses GM of violating over 117 counts of various state and federal laws, including but not limited to, fraudulent concealment, breach of warranty and unjust enrichment.

GM has been made aware of the defect and has tried to generate a solution for the 2017 model. Production of the Z06 was suspended for a time while the company attempted to determine a solution to consumers’ woes. They eventually claimed to fix the overheating by creating a new hood with larger vents and a new supercharger cover, but the overheating continues to be a prevalent issue seen in the 2017 model.

The drivers believe that the improvements were purely cosmetic and did not solve the issue at hand. GM has only dealt directly with the issue by warning owners that the automatic transmissions may overheat. The plaintiffs contend that “GM cannot shift its warranty obligations onto its customers” and should instead retrofit the 2015 and 2016 models with an effective cooling system and follow through on the promise to fix the 2017 model before consumers may purchase it.

Those who are currently involved in the suit are gunning to represent anyone who has either purchased or leased a 2015-2017 Corvette Z06.