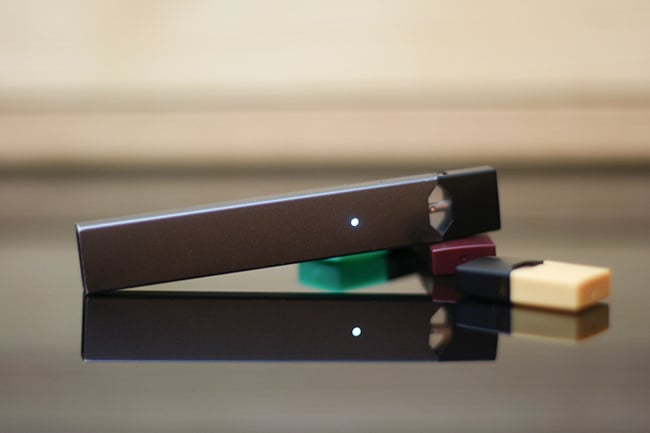 The JUUL litigations, previously outlined in our Mass Tort of the Month series in January 2021, have seen recent procedural updates. The following is continuing coverage of the status of the current cases.

According to the product website, the JUUL device is a vaporizer with regulated temperature control into which JUUL pods filled with a proprietary e-liquid formulation are inserted. The e-liquid combines glycerol, propylene glycol, flavor, nicotine and benzoic acid.

JUUL Labs heavily markets the product as a safer and easier way to smoke as compared to traditional cigarettes. Specifically, it is alleged that JUUL targets teenagers with its marketing and fails to warn consumers about the serious risks associated with the product. A single JUUL cartridge is roughly the equivalent to a pack of cigarettes or 200 cigarette puffs.

Studies show that teenage users of JUUL products often fail to realize that are they consuming a higher amount of nicotine than traditional cigarettes. Some users don’t even recognize that they are consuming nicotine at all, instead of believing that they are only vaping flavoring. Studies have shown that adolescent nicotine addiction causes substantial neural remodeling to those parts of the brain governed by dopamine or acetylcholine which are key in reward functioning and cognitive functioning.

To further its appeal to a youthful market, JUUL products leave a sweet-smelling vapor for only a few seconds before dissipating, unlike the lingering heavy odor of traditional cigarette smoke. Additionally, JUUL products are small and stylish and can be mistaken for USB drives and easily concealed from parents and teachers.

In September 2019, the FDA sent a letter to JUUL CEO Kevin Burns warning the company that they have a continuing responsibility to act to address the electronic nicotine delivery system (“ENDS”) youth addiction epidemic. On September 6, 2019, the Center for Disease Control and Prevention announced that it had found 450 possible cases in 33 states of smokers with severe lung disease linked to vaping, including five reported deaths. Retail giant Walmart announced in September 2019, that it would stop selling e-cigarettes in all its U.S. Walmart and Sam’s Club stores.

On October 2, 2019, the Judicial Panel on Multidistrict Litigation (“JPML”) issued a transfer order, consolidating 10 suits filed in federal courts across the country against common defendant JUUL Labs, Inc. to the U.S. District Court for the Northern District of California under Judge William Orrick. The case is In Re: JUUL Labs Inc., Marketing, Sales Practices, and Products Liability Litigation, Case No.: 2913 filed in the U.S. District Court for the Northern District of California. Plaintiffs in the MDL all similarly allege that defendant JUUL Labs Inc. has marketed its e-cigarettes in a way knowingly designed to attract minors. Additionally, suits in the MDL allege that JUUL markets its products as containing 20% less nicotine than they actually contain, thus influencing consumers who are looking to quit smoking into buying the product.

Therefore, on December 15, 2020, both parties filed a joint notice announcing that 12 randomly selected cases were to be included in the bellwether discovery pool. On February 1, 2021, Judge Orrick issued an order identifying six cases to be included in the first round of government entity bellwethers. JUUL filed a motion to dismiss and/or strike subclass claims on February 9, 2021, arguing that more than half of the subclasses and class representatives never filed an underlying class complaint. In its motion, JUUL argues that the lack of underlying complaints for 27 putative class actions and 57 class representatives indicates there is no action that could eventually be tried or go to judgment.

On March 25, 2021, the court issued a tentative ruling indicating that it was inclined to deny all of the defendant’s motions to dismiss except for the state claims where there are no class representatives—which exists in Delaware, Washington D.C., Idaho and North Dakota. The court further ordered that any of the 57 state sub-class representatives who have not filed a separate complaint asserting claims by April 1, 202,1 will be dismissed. On April 14, 2021, Judge Orrick issued an Order on Second Round of Motions to Dismiss confirming his earlier inclinations made on March 25, 2021. In the April 15, 2021 Order, Judge Orrick denied the majority of the defendant’s motions to dismiss, only dismissing certain state claims under Delaware, Washington D.C., Idaho and North Dakota law, holding that there are no class representatives residing in those jurisdictions.

Similar to suits filed in the opioid litigations, JUUL Labs is facing claims from a growing number of state attorney generals, including in New York, California, Illinois and Washington D.C., in state court on behalf of state residents. In addition, as of February 2020, 39 states were investigating JUUL Labs for its health claims and marketing practices as they relate to JUUL products.

In the suits, the AGs argued that JUUL’s aggressive advertising of its multi-flavored products contributed to a public health crisis that has left countless state residents, many of whom are teenagers, addicted to its products and fighting for their health. These suits point out the fact that in 2010, the U.S. Surgeon General concluded that nicotine has the same effect on the brain as cocaine and heroin. The suits further allege that even infrequent use of nicotine products is enough to put teens at risk for addiction, due to the fact that their brains are still developing and are therefore prone to nicotine addiction at a much lower concentration than in adults over 26. AG suits also pointed out that in 2016, roughly one-third of surveyed teens reported that they thought JUUL products were harmless. It is further argued that JUUL has seized upon Big Tobacco’s advertising and flavoring tactics allowing it to profit at the expense of the health of state residents. Litigation is ongoing.