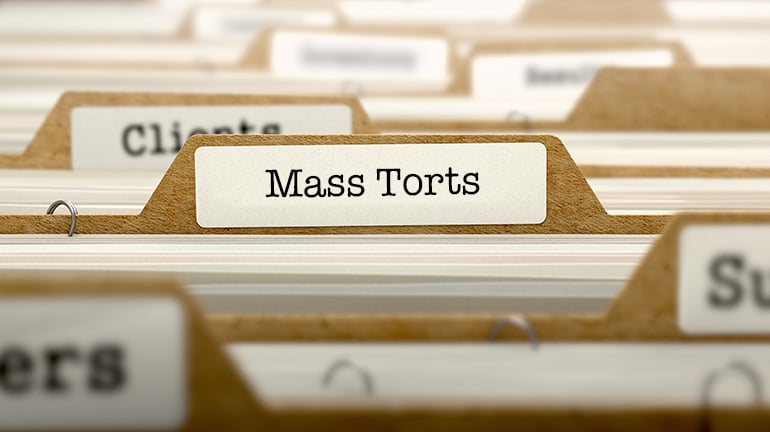 As a follow-up to the previously published Mass Torts to Keep an Eye on in 2021, we revisit four mass tort litigations and their current status.

Initially, on December 4, 2020, Judge Polster issued a notice and order informing all parties that due to the worsening statistics regarding the COVID-19 pandemic, the scheduled bellwether trial involving two Ohio counties (Trumball County and Lake County) would be postponed. The bellwether trials were originally set to take place in May 2021.

On March 10, 2021, however, Judge Polster ordered that five cases would be selected to proceed to trial in new litigation tracks. The order provided that each case must include the four national pharmacy chains: Rite Aid, CVS Health Corp., Walgreens Co., and Walmart Inc. On March 26, 2021, Rite Aid filed an objection to the bellwether selection order, arguing that Judge Polster erred in referring to Rite Aid as a national pharmacy, as it currently only has locations in 18 states and, at its height, only had stores in 32 states.

On April 7, 2021, Judge Polster, via teleconference, announced the next five bellwether cases in the MDL. In his announcement, he continued to maintain that his decision in selecting the suits was not an attempt to force the defendants into a settlement and was not in any way a retaliation against the pharmacies for not already entering into a global settlement as had been previously suggested by the defendants. In response to Rite Aid’s assertion that it should not be considered a national pharmacy chain, Judge Polster reassured the pharmacy that it would not be a defendant in all five bellwethers. On April 8, 2021, U.S. Magistrate Judge Young B. Kim recused himself from involvement in the litigation after it was announced that his sister, attorney Nancy Kim, was appointed as the attorney to represent pharmaceutical giant AbbVie in the company’s opioid cases.

Similar to the delays experienced by the Northern District of Ohio litigations, in the Southern District of West Virginia, Judge Faber suspended the previously scheduled January 2021 trial between Cabell County and the City of Huntington and three major drug distributors, AmerisourceBergen Drug Corp., Cardinal Health Inc., and McKesson Corp, due to the worsening COVID-19 pandemic. In January 2021, Judge Faber announced that the delayed trial would take place on May 3, 2021, and would likely span 12 weeks, with six weeks being dedicated to the plaintiffs’ case and the same time period allotted to the defense.

The products liability litigation involving e-cigarette and other products manufactured and sold by Juul Labs Inc. (“Juul”) is also set for significant procedural developments in 2021.

Therefore, on December 15, 2020, both parties filed a joint notice announcing that 12 randomly selected cases were to be included in the bellwether discovery pool. On February 1, 2021, Judge Orrick issued an order identifying six cases to be included in the first round of government entity bellwethers. Juul filed a motion to dismiss and/or strike subclass claims on February 9, 2021, arguing that more than half of the subclasses and class representatives never filed an underlying class complaint. In its motion, Juul argues that the lack of underlying complaints about 27 putative class actions and 57 class representatives indicates there is no action that could eventually be tried or go to judgment.

On March 25, 2021, the court issued a tentative ruling indicating that it was inclined to deny all of the defendant’s motions to dismiss except for the state claims where there are no class representatives which exist in Delaware, Washington D.C., Idaho, and North Dakota. The court further ordered that any of the 57 state sub-class representatives who have not filed a separate complaint asserting claims by April 1, 2021, will be dismissed. On April 14, 2021, Judge Orrick issued an Order on Second Round of Motions to Dismiss confirming his earlier inclinations made on March 25, 2021. In the April 15, 2021 Order, Judge Orrick denied the majority of the defendant’s motions to dismiss, only dismissing certain state claims under Delaware, Washington D.C., Idaho, and North Dakota law, holding that there are no class representatives residing in those jurisdictions.

The Paragard litigation gained momentum in federal court in the fall of 2020 when plaintiffs urged the Judicial Panel on Multidistrict Litigation (“JPML”) to transfer and centralize cases into an MDL in U.S. District Court in the Central District of California under Judge John A. Kronstadt.

Thereafter, in December 2020, certain plaintiffs argued for consolidation of all federal claims in a different court—the U.S. District Court in the Northern District of Georgia under Judge Leigh Martin May, which was granted. Proponents of Judge May contended that the suits should be presided over by a female because the litigation involves a product designed for women.

Judge May issued an order appointing the Plaintiffs’ Leadership Committee on February 18, 2021.

Plaintiffs in the Paragard litigation allege that defendants Teva Pharmaceuticals Industries Ltd. and its affiliates (“Teva”) marketed and sold Paragard IUDs to the public as a safe and effective and have fewer side effects than other forms of birth control, when for decades defendants have known that Paragard regularly breaks inside the body, causing pieces of the Paragard to remain in a woman’s body even after it is removed.

Plaintiffs further assert that Teva actively downplayed the risks associated with the product and fraudulently withheld important safety information from both healthcare providers and the public, resulting in horrific injuries.

Elmiron is a prescription drug that treats interstitial cystitis, also known as bladder pain syndrome. Specifically, the plaintiffs argued that the defendants knew, or should have known, that Elmiron, when taken as prescribed and intended, causes harmful retinal damage and maculopathy. Plaintiffs argue that the defendants failed to warn, instruct, advise, educate or otherwise inform Elmiron users and prescribers about the risk of pigmentary maculopathy and the need for ophthalmological monitoring.

Plaintiffs claim that at all relevant times, the U.S. label for Elmiron made no mention of risk to patients’ eyes or vision.

On December 15, 2020, the JMPL centralized federal actions involving retinal injuries associated with the use of Elmiron in the District of New Jersey under Judge Brian R. Martinotti. In early January 2021, the plaintiffs submitted a motion for the appointment of a plaintiffs’ steering committee (“PSC”) and encouraged Judge Martinotti to create a PSC that reflected significant diversity in gender, ethnicity, geography, and experience.

On January 22, 2021, Judge Martinotti appointed a diverse PSC which includes a wide range of both younger and older attorneys of different genders. In his order, the judge said that the PSC appointed will provide the Court with an effective committee to advance the litigation in an efficient manner, in addition to advancing the Court’s and the JPML’s goal of introducing new and different counsel to this special area of practice.

According to the most recent case management order from April 9, 2021, the parties are continuing to meet and confer regarding all discovery issues.

The legal system continues to push forward despite the ongoing challenges presented by the global pandemic and many are hopeful the pace at which the court systems operate will slowly return to normal. These litigations and many others are likely to see developments throughout the year, which we will monitor to provide continued updates.