A Closer Look at the Zantac Litigations: A Conversation with Attorney Beth Fegan 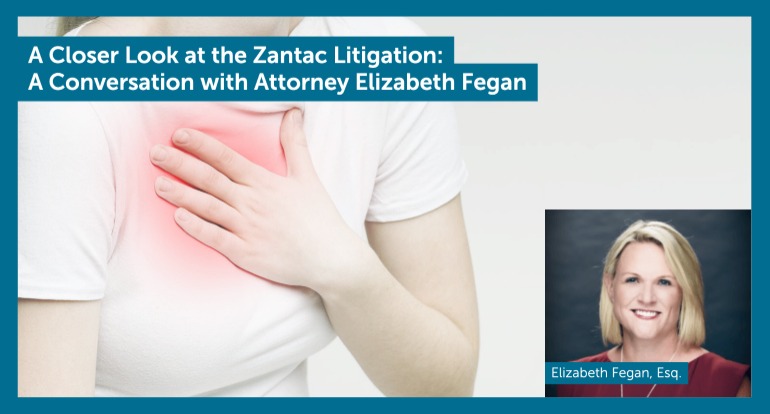 As courts across the country began reopening, many litigations saw significant progress as COVID-19 restrictions were eased. One litigation that has seen substantial activity in 2021 is the Zantac litigation, which we originally profiled in our mass tort series nearly 18 months ago. Since our first article on Zantac was published, a multidistrict litigation (“MDL”) was formed and leadership positions were appointed, propelling the litigation forward.

The first Zantac lawsuits were filed in the fall of 2019 by two separate individuals. The first case was filed in Florida state court and the second in Colorado. By January 2020, proposed class actions against the manufacturers of the drug were filed in two separate federal courts. In February of 2020, the Judicial Panel on Multidistrict Litigation (“JPML”) consolidated the litigation in the Southern District of Florida to U.S. District Judge Robin L. Rosenberg. As of the date of publication, there are state court consolidated proceedings in California and other venues across the country.

We recently spoke with a member of the plaintiffs’ steering committee, attorney Beth Fegan, partner and co-founder of FeganScott.

CF: To start, can you give us a brief overview of the litigation and the injuries and causation are that are driving this litigation?

BF: The simple answer is that Zantac is a popular over-the-counter (“OTC”) heartburn medication that is widely used and became a part of daily life for many Americans because it can be used to treat a variety of conditions. It was recalled because it was discovered that the active ingredient in Zantac turns into NDMA when metabolized in the body.

NDMA is a carcinogen that causes cancer. There are +a number of subject cancers, including bladder and stomach cancer, which we believe are related to and caused by the NDMA produced by Zantac.

CF: Zantac was on the market for a long time. When did concerns about the drug begin?

BF: The FDA began preliminary investigations into NDMA levels in Zantac in September 2019. Shortly thereafter, several manufacturers voluntarily stopped distribution of the product. Ultimately, in October of 2019, the FDA mandated that all manufacturers of ranitidine (the active ingredient in question) conduct testing for NDMA in their products, which uncovered that the amounts exceeded the safe levels set by the FDA for human consumption.

CF: What is the current procedural status?

BF: Procedurally, we have survived multiple rounds of motions to dismiss as to the branded manufacturers. However, the Court held that claims against the generic manufacturers and distributors/retailers were preempted.

Besides the Motions to Dismiss, we are also well into discovery. Discovery, at least in respect to general causation and class certification, closes in December of 2021. We are almost 18 months into discovery and are starting to prepare expert reports.

CF: Zantac was recalled and is no longer available for sale, is that correct?

CF: When did that version of the drug come onto the market?

CF: What would you say the major challenges to the Zantac litigation are?

BF: One major challenge is the number of defendants and manufacturers involved in Zantac. Zantac launched in the 1980s as a brand-name prescription drug. Over time, patent protection went away and generic manufacturers entered the market.

Once generics were available to consumers, Zantac became an over-the-counter product. So, in addition to the generic prescription manufacturers, there were a variety of OTC Zantac-branded products in addition to store brands, like Walmart’s Equate products.

As a result, there were dozens of defendants in the litigation. Trying to track each manufacture, how they store the product and how exposure to heat results in NDMA is challenging to say the least.

CF: Zantac is used as the overarching name to refer to the drug and there are several different defendants under that umbrella?

BF: Yes, Zantac is the brand name but there are generic versions and there are store brand versions, or OTC versions. So colloquially, they’re all known as Zantac but not all the products are sold under that name.

CF: What should attorneys who want to get involved in this litigation should look for during the intake process?

BF: Attorneys looking to get involved in the MDL should focus on the subject cancers. I’d say that’s most important based on the work we’ve done with the experts.

Another important component is length of ingestion. There’s no cut-off for how long someone had to take Zantac to have it result in cancer. At the same time, it’s unlikely that one pill is going to cause cancer. So, length of time is helpful.

A third key factor is understanding and working through the registry process. In the litigation, we’ll help attorneys identify the particular defendant manufacturers that were producing the drug at the time a particular client took it. It will be important to be able to point to the specific manufacturers. And again, I can’t stress enough the importance of the subject cancers.

CF: Has the litigation been affected by COVID-19 related setbacks at all?

BF: No, and in fact we’ve received a lot of the MDL court’s attention during COVID. The district court judge, as well as the magistrate judge have been holding hearings via Zoom. They regularly set them up very quickly. The remote proceedings have facilitated the litigation progressing on a very fast track.

CF: I’ve heard that from a lot of attorney. For example, the 3M litigation was ahead of schedule.

BF: Wow! It’s crazy. You know, normally we’d all be flying to Florida, where the MDL Judge is located, or traveling to the hundreds of depositions that have been taken. Instead, it’s like, ‘nope, we’re all just going to jump on zoom tomorrow with the judge,’ which is great.

For more on the Zantac litigations, click here to read our Mass Tort of the Month litigation spotlight.